Everyone agrees the normal distribution isn’t a great statistical model for stock market returns, but no generally accepted alternative has emerged.  A bottom-up simulation points to the Laplace distribution as a much better choice.

A well-known problem in financial risk assessment is the failure of the normal distribution (also known as the Gaussian distribution) to correctly predict big up or down days on the stock market.  Even though these volatile days are infrequent, they can make a big difference in the performance of an investment portfolio.  At least publically, the financial industry has not moved on to better models, probably because no alternative has been accepted as superior.

My interest in this area stems from the frequent use of sigma notation by commenters when the market experiences big swings.  For example, there was a multi-day 10 sigma increase in the value of the VIX index associated with the August 2015 correction and an 8 sigma single day downswing a couple of weeks later.

The term “sigma” is equivalent to the statistical term “standard deviation”, one of the two key descriptors in a distribution (the other is the mean or average).  Sigma can be used as a shorthand way of indicating the relative magnitude of a market move.  For example, if the S&P 500 drops 2.92% in a day (doubtless inciting headlines with the word “crash” and “depression” in them) we can determine the sigma level of this event as three by dividing the percentage drop (2.92%) by the S&P’s historic standard deviation (0.973%).

The normal distribution assesses the odds of a -3 sigma day like this at 0.135%, which assuming a 252 day trading year predicts a drop this size or greater should occur about once every 3 years of trading.

The odds associated with 8 to 10 sigma events for a normal distribution are truly mind-boggling.  The chart below illustrates how often events of various sigma levels should be expected.

When high sigma events do occur analysts often use their outrageous unlikeliness to promote their agenda—usually predicting the imminent collapse of the financial system and/or indict their favorite bad guys (e.g., Federal Reserve, Evil Bankers) for manipulating the markets.

I disagree.  The reasonable conclusion from seeing 5 or higher sigma events in the markets should not be that things are falling apart or that the market is rigged, instead, we should recognize that we are using the wrong probability model.

Where the Normal Distribution Works—And Where it Doesn’t

Graphically comparing the S&P 500 returns since 1950 with the matched normal distribution looks like this: 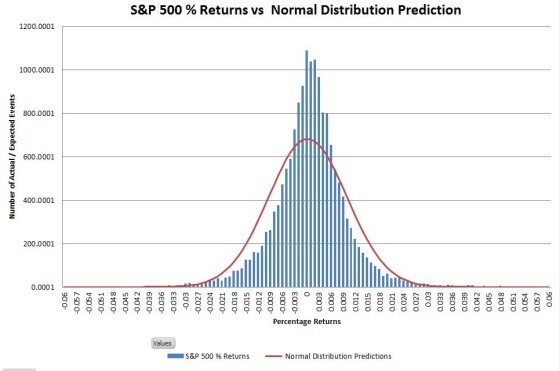 The actual returns have a higher central peak and the “shoulders” are a bit narrower, but the historic frequency of events occurring within the +-3 sigma range isn’t significantly different from what is predicted by the normal distribution. The big mismatches are in the tails of the distribution—which you really can’t see on a linear scale. Changing the vertical axis to use logarithmic scaling allows us to zoom in on the tails. Once you get past +-4 sigma moves it’s hard to visualize how vast the differences are between the S&P 500 actual returns and the predictions of the normal distribution. The vertical dotted black line on the right side of the chart illustrates the problem.  In the last 67 years, the S&P has had two days with returns between +5.5% and +5.6%.  The normal distribution estimates the probability of one event of that magnitude as 0.0001 in 67 years (where the dotted black line touches the red line) —in other words, we should expect a move near +5.5% once in 670,000 years on average—and in reality, we’ve had two of them in 67 years!

From a risk analysis standpoint, this is analogous to building your house above the 670,000-year flood line and being flooded out twice in the last 67 years.

To my knowledge, none of these papers suggested a causal mechanism to explain why stock market returns should have their proposed distribution of returns.  It’s relatively easy to torture a set of equations until it delivers the sort of distribution you desire.  What’s hard is proving that these distributions will do a good job of predicting future returns.  Since new return data comes in only one day at a time, it will take decades before any of these alternate proposals can emerge as superior.

So What Can Be Done?

In this section, I’ll provide an abbreviated discussion of the steps that led me to an alternative to the normal distribution. At the bottom of the post, in the “Quant Corner” section I’ll provide some details for those that want the next level of detail.

Verifying that a new model is superior to the normal distribution is tough since new historical data dribbles in too slow to be helpful.  However, all is not lost—another way to verify is to come up with a realistic bottom-up model for how the stock market works and then run that model many times with realistic random inputs to generate lots of expected results.  If the simulated results show a convincing match to the actual results then those results can be used to evaluate various theoretical solutions.  It’s not a proof, but it’s more convincing (at least to me) than a top-down historic data matching exercise.

My approach to modeling the bottom-up behavior of the stock market incorporates one of its key characteristic—intraday correlations.  Depending on the day, stocks may move randomly with respect to each other, in lock-step, and occasionally in complete opposition (e.g., oil drops in price, energy companies go down, transportation stocks go up).  We can quantify the degree of synchronicity of these moves with a statistical measure called Pearson’s Correlation Coefficient, which returns values ranging from -1 for patterns moving in opposition to 1 for patterns in lockstep.  I measured historical patterns of correlation between stocks by comparing the moves of one sector of the S&P 500 with another.  I decided to use sectors instead of stocks to minimize the impact of corporate actions and company-specific idiosyncracies.  Using 16 years of data I computed the correlation between the S&P 500 (energy and consumer) sectors and produced the following histogram: As you can see lock-step (correlation of one) on the far right is the most common situation—but there’s a fair amount of variation.  This chart is representative; I looked at multiple combinations of different sectors and they all looked very similar to this result. I hypothesize that on many days the buyers and sellers of the stocks in a sector behave very differently from the buyers and sellers in other sectors, however on some days (e.g., panics, market rallies), the behaviors of all the participants in all sectors become synchronized.  The behavior of crowds/rallies/mobs might be a good analogy (thanks to Asad Aziz for that observation).

Rather than try to derive a theoretical relationship from this data I took the easy way out and just used the data itself in a Monte Carlo simulation of the stock market to model 5 million days of trading with variable correlation.  For each day of the simulation, I randomly picked a trading day between December 23rd, 1998 and January 25th, 2016 and used XLI’s correlation with XLP on that day to generate randomized returns for 75 different stocks with that same level of correlation.  The daily returns for those 75 stocks were then averaged to generate the daily return of the “market” itself.

The chart below compares my simulated results (green line) to the actual S&P 500 and the predictions of the normal distribution: Comparing events in the tails is tricky because you can’t have partial events.  Instead, what happens is that as you move out on the tails you have more and more bins with zero events.  With the 5 million day simulation I had enough data to extend out the tails considerably, but with only 16630 actual data points empty bins occur pretty quickly in the tails. I used moving averages (purple lines on the chart below) to convert these occasional events into an events-per-bin metric—providing a more nuanced picture of how the actual tails compare to the simulated ones. The data for the right tail closely matches the simulation. The left tail actuals are fatter than the simulation, but it’s still not a bad match

Given the impressive match between the actual and simulated results, the next question is whether there’s a theoretical distribution that matches these non-Gaussian results.

One characteristic that jumped out at me when I looked at the logarithmically scaled histograms of actual data was the linearity of the slopes.  A straight line on a log chart is an exponential relationship.  Two back-to-back exponential decay curves, centered at the mean, should closely match the data. This kind of distribution is called a double exponential, or Laplace distribution. Not surprisingly there isn’t an exact match between the S&P 500 distribution and the ideal Laplace distribution; the tails of the S&P are somewhat wider.  Since the goal of this exercise was to come up with a way to more accurately estimate the big up/down days I adjusted the Laplace’s scale parameter such that the number of 5 sigma or greater events was roughly the same between the predicted and actual distributions.  The result looks like this: This adjusted Laplace distribution closely matches the S&P 500 historical data in predicting that every year there’s around a 75% chance of having a 5 sigma or higher event—a far cry from the normal distribution’s prediction of once per 6900 years.

I haven’t looked at a lot of cases, but I suspect the adjustment factor will be relatively consistent.  The scale adjustment for IWM (Russell 2000) is 17% and 12% for Apple.

The art of science and engineering is using concepts and relationships we know to be not quite true to generate reliable results.  For analyzing market risk the normal distribution does not pass the “not quite true” test; it is seriously flawed when used to predict/analyze the more extreme moves of the market that historically happen every couple of years.  It’s time to start using the Laplace distribution.