While doing simulations on volatility and the square root of time, I started thinking about how options experience time—is it calendar time, market time, or something in-between?  The CBOE’s VIX® calculations use calendar time, a 365 day year, but most option gurus recommend using a 252 day year for volatility calculations—the typical number of trading days per year in the USA markets.

When it comes to option decay most people, including the gurus, believe that option values decay when the markets are closed—a position I believe conflicts with the 252-day approach to annualizing volatility.

The experimental discovery that led to the current theory of option decay occurred in 1825 when the botanist Robert Brown looked through his microscope at pollen grains suspended in water and noticed they were moving in an irregular pattern.  He couldn’t explain the motion but later physicists including Albert Einstein showed it was the result of water molecules randomly colliding with the pollen. This effect was named “Brownian Motion” in honor of Mr. Brown.

If you effectively stop time in Mr. Brown’s experiment (e.g., freeze the sample), the pollen will stop moving.  Or if you close a casino for a day (probably a better model for the market) the net worth of the associated gamblers stops dropping.

Defenders of the calendar time approach point out there are many activities/events with broadband impact that can move the value of the underliers while the market is closed.  Things like extended trading hours, activity in foreign markets, corporate announcements, geopolitical events, and natural disasters.

However, most noteworthy events that happen outside of market hours tend to be bad news.  For example, I’m not expecting to see headlines any time soon stating, “ISIS disbands, ‘We realized it was all a terrible misunderstanding’”, or “Harmless landslide reveals huge cache of gold”.  This tendency towards negative moves is reflected in the average annual growth rate of off-market hours for the last 20 years, -0.37% vs +9.59% for market hours.   And bad news tends to make option prices go up…

If option time is still running when the markets are closed, I would expect the market’s opening value to be different from the closing value.  Below is a quick look at the last 20 years of data:

When I initially did this analysis I used SPX numbers, but it turns out the SPX “open” is usually just copied over from the previous close, so I switched to SPY which has more reliable numbers. While the open to close and close to open numbers aren’t that different the number of >1% moves is less than half the number during market orders, supporting the hypothesis that things are quieter outside of regular hours.

So far my arm-waving arguments give the edge to market time over calendar time, but really, so what?

Practically there are two things where this makes a difference: the dynamics of option decay and the accuracy of implied volatility calculations on soon to expire options.

Novice options traders are usually disappointed if they try to profit from Theta decay over the weekend.  If the underlying doesn’t move, options prices typically open on Monday unchanged from the Friday close.  Commentators explain this phenomenon noting that market makers, not wanting to be stuck with Theta losses over the weekend, discount prices, overriding their models before the weekend to move their inventory—just like a fruit vendor would.

I think the market makers are right for the wrong reason.  Their computer models are (or at least were) based on calendar day assumptions—which assume option decay during the weekend.   By overriding their models, they are pricing according to what really happens—no decay when the market is closed.

For longer-term expectations of volatility, it doesn’t matter much which approach you use.  For options expiring a month from now the differences in implied volatility are only a few percent between the 365 vs 252-day models.  However, for shorter expirations, the differences can be dramatic.

The chart below compares per minute values between the two annualizing approaches and shows the percentage difference.  The calendar based approach is the black line and the green line is the market time.  Notice how the difference peaks at Monday open and drops to near agreement at Friday close. This “weekend” effect is sometimes visible in the CBOE’s VIX index and is pretty dramatic with their shorter-term VIX9DSM index—not surprising since this index is based on S&P 500 (SPX) option prices with at most 9 days until expiration.

There are good reasons to use a calendar day approach to annualization.  It isn’t sensitive to holidays, unexpected market stoppages, or differences in trading calendars between countries.  I expect that’s why it became a de facto standard in the implied volatility world.  But the rise of shorter-term volatility products like weekly options has shifted the volatility landscape enough that I think we need to at least know what is technically correct.

An analytic approach to a solution

First I validated this approach with a Monte Carlo simulation1 that computed the theoretical annualizing factor for a simulated 64 year market period—and then repeated that exercise 10000 times to get the statistics of the calculation.  I then applied the same calculation to the S&P 500’s returns2 over the last 64 years. The result: 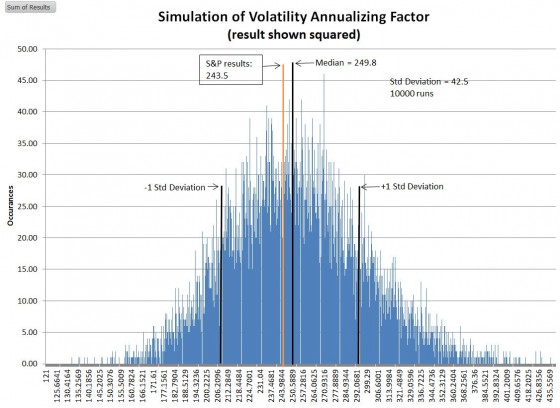 The S&P 500 data is consistent with a 252 day based annualizing model—which doesn’t support option decay while the market is closed.  The data also indicates that when you see suspiciously high short term volatility numbers at the beginning of the week, you should chalk it up to flawed algorithms, not anything real in the market.

5 thoughts on “The Myth of Option Weekend Decay”