Skip to content
Published 1-November-2009
The current SPY trend line obviously can’t continue indefinitely.   Although I don’t think charts predict the future, they do show previous psychology, so I took a look back at 12 years of data.   A couple of interesting things stood out to me.   In that time span there have been three fast recoveries after significant corrections.   The one in Sept 98 through May 99 was after an approximate 20% correction (seems mild now). Bear phases beginning in 2000 and 2008 both ended in March, and then began dramatic climbs–the 2003/2004 climb lasting a full year, and the 2009 bull run with 7 months so far.    With the 1998/1999 and 2003/2004 climbs, steep trend lines both ended with a transition into a trading range,where the S&P 500 traded in a fairly narrow range for quite a while.      Click on chart to enlarge.

Some people are predicting a “W” shaped recovery, with the market going into a sharp correction.  Others, probably gaining in credibility now that we are supposedly at the end of this recession, are predicting a continued bull run, or a transition into a “square root” shape.    My guess is that we will go into a trading range–which works out fine for me if I can figure out the support and resistance lines relatively quickly.

The chart below superimposes the 2003 and the 2009 recoveries on top of each other.  The SPY prices from 6 years apart are absolute (not scaled).  So much for a buy and hold strategy…  On the other hand, the volumes on SPY in 2009 are dramatically higher — almost a factor of 6.    The 30 day average volume numbers are heavily massaged to get them to fit on the same graph and the first 30 days is not fully averaged due to my laziness.     Click to expand. 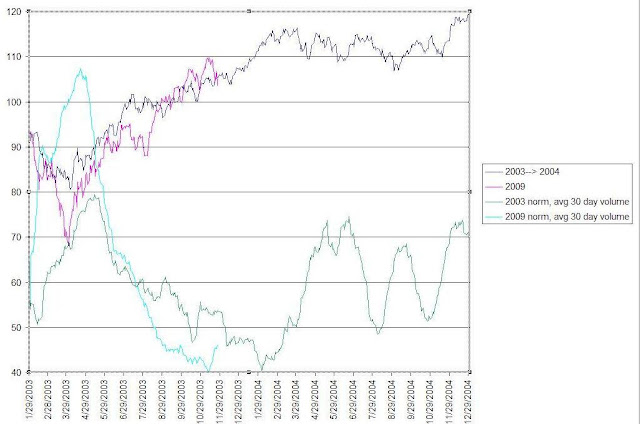 There were a couple of things that surprised me in this graph. The 2009 recovery, while steeper than the 2003 event, has settled into a very similar path now.   The capitulation in March 2009 was more severe (with good cause) than the 2003 market–people were incredibly negative.   The shape of the relative volume curves are very similar too, with high volumes as the recovery began, and then dropping off fairly sharply as prices rose.

If we move into a trading range, then we can reasonably expect relative volumes to increase.    If the 2009/2010 recovery matches the 2003/2004 recovery we will have another 4 months on the trend line.  I’d be surprised if it lasts that long before we go into a trading range.